Follow the Warrior Fitness Trail on your own. Stop at each of the stations to perform specific exercises and view accompanying art on the Art Trail.

The first station from the warrior fitness trail is in front of Mort Harris building. There is a statue from Alice Smith b. 1958. It is named after a clever spirit in West African folklore, Iktomi honors Dr. William R. Keast, WSU president from 1965-1971, who served during the turbulence of the 1967 riots and the Vietnam War. Throughout this period he continued to further WSU's standing as a leading urban university. Born in Birmingham, Alabama, Alice Smith came to Detroit to study glass at CCS and received her MFA from WSU in 1995. 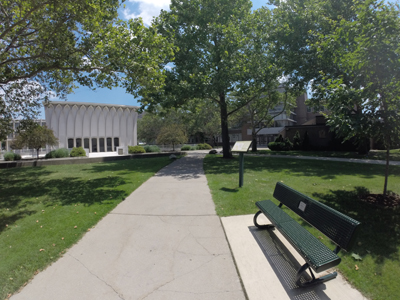 The second station of the warrior fitness trail is between parking structure number two and the Manoogian building. There is not a close statue in this zone, but there is a great space to exercise.

Distance to next station: 0.8 miles

The third station of the warrior fitness trail is behind the Matthaei Physical Education Center. There is a big wall and a great space to exercise. There is not any special statue, but there is a sidewalk, now known as the 'Spirit Walk' which is located between the fit station and the softball field, leading up to the football stadium.

The distance to next station: 0.7 miles 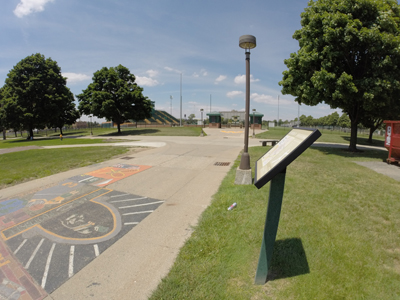 The fourth station of the warrior fitness trail is in front of the Manoogian building. There is the sculpture from Tyree Guyton b. 1955. He said of Invisible Doors, 'it is designed with the hope of helping people to open mental doors of our minds – doors that often block us from seeing new possibilities for all people.' In 1986, Detroit native, Guyton began The Heidelberg Project, a transformative art installation in his struggling Detroit neighborhood, which has received both local controversy and international acclaim.

The distance to next station: 0.3 miles. 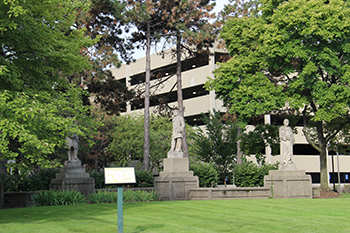 The fifth station of the warrior fitness trail is next to the Purdy Library building. There is the statue from Robert Schefman b. 1952. This massive sculpture takes its title from the word 'lieu' or 'place' and signifies a physical reality. No element is square with any other, providing a sense of motion even to this firmly grounded work. Robert Schefman was born in Detroit, lived and worked in New York City for thirteen years and returned to the Detroit area in 1989.

Distance to next station: 0.1 mile. 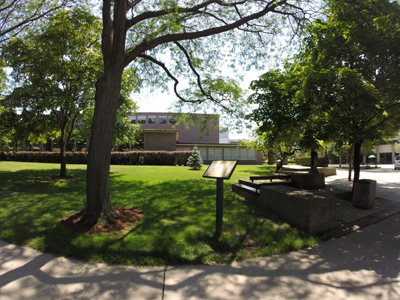 The sixth station of the warrior fitness trail is in front of the Belcrest Apartments. There is the statue from Oskar Stonorov. He created this work, which originally stood on the banks of a stream on the Reuther estate, for his good friend, May Reuther, who was an active supporter of Dance. Stonorov was a modernist architect, architectural writer, historian and archivist who immigrated to the United States from Germany 1929.

Distance to next station: 0.5 miles. 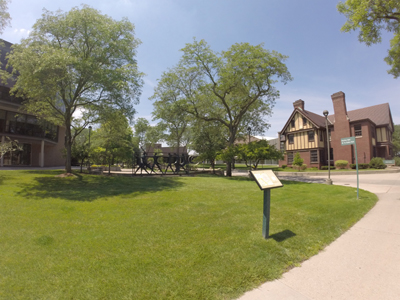 The seventh station of the warrior fitness trail is next to the Art Building.

There are three different statues around it. One of them is from Michael Todd b. 1935. This sculpture, like all works from Michael Todd's Ikebana series, is infused with Asian symbols. The blend of organic and geometric shapes reflects his interest in metaphysics. Todd is a prominent California sculptor who received his BFA from Notre Dame in 1957 and an MA from UCLA in 1959. The next sculpture is from Georg Koble (1877-1947). This tranquil bronze figure overlooks the McGregor sculpture court which offers a quiet, reflective spot in the heart of Wayne's busy urban campus. Georg Kolbe, known as Germany's Rodin, was the leading German figure sculptor of his generation, developing a vigorous, modern and classical style. The next and last sculpture around this zone is from Sergio de Guisti b. 1941. Commissioned to mark the centennial of WSU in 1968, this four-foot bronze medallion portrays General Anthony Wayne whose military exploits in the American Revolution earned him the moniker 'Mad Anthony.' Born in Italy, Sergio De Guisti arrived in Detroit in 1954. He received both his BFA and MFA degrees from WSU.

Distance to next station: 0.1 mile. 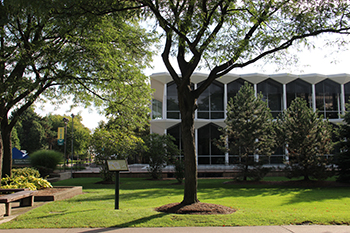 The eighth station of the warrior fitness trail is next to RFC Center.

There is the statue from G. Alden Smith. This sculpture represents the artist's visual concept of the learning process, with intertwining limbs bursting into an open upward movement. G. Alden Smith served as the Head of the Art and Art History Department at WSU from 1962 - 1978 and was pivotal in developing the sculpture department where he mentored such students as David Barr, Sergio De Giusti, Jim Pallas and others. This is the last station of the whole warrior fitness trail. 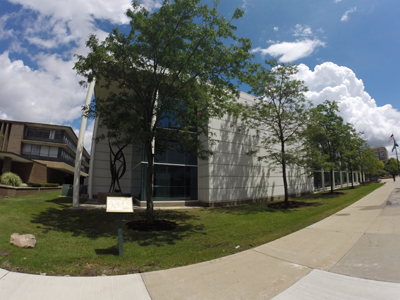 You did it, 2.5 miles! This is the last station of the Fitness Trail. There is an option to go an additional .6 miles for a total of 3.1 miles (equivilant to a 5k). For the extension, follow the blue route. Download route map (PDF)

"Established in 2000, proud Warrior of the Department of Athletics since 2010."